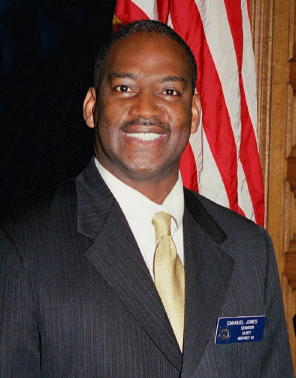 Senator Emanuel Jones, a Democrat, was first elected to the Georgia Senate from Georgia's 10th District in 2004. Senator Jones represents Southwest DeKalb and Henry County. He is the current Chairman of the Martin Luther King, Jr. Advisory Council and formerly served as Chairman of the Georgia Legislative Black Caucus for two consecutive legislative sessions.

Senator Jones is a member of the Banking and Financial Institutions, Economic Development and Tourism, Interstate Cooperation, Special Judiciary and Retirement Committees.

Senator Jones is President of the Legacy Automotive Group which includes Legacy Chevrolet Cadillac Saab of Columbus, Legacy Ford of McDonough. Senator Jones is the owner of one of the Atlanta Area's largest African American owned businesses.

Most recently Senator Jones was honored as a recipient of the Global Peace Festival Award in Malaysia and named as one of Atlanta Tribune Magazine's "Men of Distinction". He has also received the Black Enterprise Top 50 Minority Owned Companies Award as well as the U.S. Department of Commerce Minority Service Firm of the Year. Previously, Senator Jones was a 2008 nominee for the John F. Kennedy Profile in Courage Award, nominated by Ambassador Andrew Young. He was selected for the 2008 Atlanta Business League 50th Most Influential Award; the recipient of the Morris Brown College Pacesetter Award in 2008, Metro Atlanta YMCA Volunteer of the Year, Ford Motor Minority Dealer Executive Director's Award, Henry County Chamber of Commerce Business of the Year, Governors Proclamation Entrepreneur of the Year, Freshman Legislator of the year 2005, Organization of DeKalb Educators 2006, and from the U.S. Department of Commerce Minority Service Firm of the Year.

He received his MBA in Finance/Accounting from Columbia University in 1986, preceded by a BS in Electrical Engineering from the University of Pennsylvania in 1981. Mr. Jones was commissioned a Second Lieutenant in the U.S. Army Corps of Engineers in 1980 and rose to the rank of Captain. Senator Jones graduated class valedictorian from West Fulton High School in Atlanta, Ga. in 1977. Senator Jones had career positions with IBM (81-84) and Arthur Anderson & Co. (86-88), prior to entering the automobile business in 1988 as a dealer candidate in Ford Motor Company's minority dealer operations.

Senator Jones sits on various boards to include the Board at Columbia University Business School Greenhouse Project, School of Social Policy and Practice and the Georgia State University Project Healthy Grandparent's board. He was born and raised in Atlanta, GA. Senator Jones currently resides in Ellenwood, GA with his wife Gloria, sons Emanuel II, Elam and Daughter Emani. He is a deacon of the Shiloh Baptist Church in McDonough.